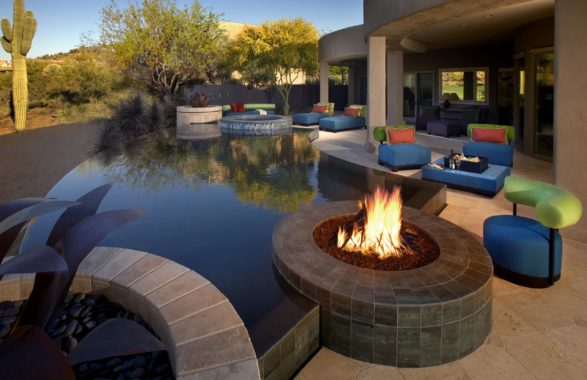 “You can stop now! You’ve torn out my old pool; I’ve only paid 20% but I’ve received 80% of the value!” said the adorable late Mr. Alan Zwerner. He just had a hard time with his previous caged-in boulder pile pool that stepped down eighteen inches from his home, and kept him from enjoying his golf course view. “Make it quiet and serene!” he asked.

Raising the deck to match the home, and then raising the pool twelve inches as a perimeter overflow pool that echoed the radial line of the home, we were able to eliminate the pool fencing and connect the reflective pool to the golf course vista beyond.

Never did I have such a raving fan.

One day I got a call and it was Alan, working poolside from home… “Kirk, I just wanted you to know, a bird just flew over my pool, real low and fast… and then a few moments later, there was a ripple that followed where he had flown past. Spectacular! That’s all. Just wanted to tell you, thanks!”

You are so welcome Mr. Zwerner.